Site of the famous miracle of the Gadarene swine, Gadara was renowned in its time as a cultural centre. It was the home of several classical poets and philosophers, including Theodorus, founder of a rhetorical school in Rome, and was once called “a new Athens” by a poet. Perched on a splendid hilltop overlooking the Jordan Valley and the Sea of Galilee, Gadara is known today as Umm Qays, and boasts an impressive colonnaded street, a vaulted terrace, and the ruins of two theatres. You can take in the sights and then dine on the terrace of a fine restaurant with a breathtaking view.
Pro-tip: While some tourists drive directly from Amman to Umm Qays, most take the opportunity to visit Jerash or Ajloun along the way

Umm Qays Museum
The museum, which is located in one of the houses in the Ottoman village of Umm Qays, composed of two exhibition halls. In the first hall, various ceramics dating from the Hellenistic up to the Islamic periods are on display, along with finds from the tombs at Umm Qays.

The second hall is dedicated to statuary, mostly from the Roman period. Into the large courtyard, basalt sarcophagi, column capitals and bases, two basalt gates, mosaics and the famous seated Tyche were moved from the site. 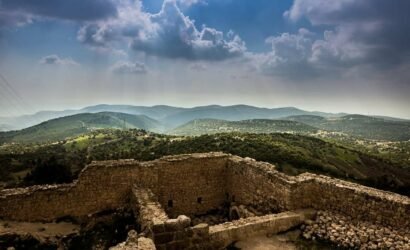